Q&A – Pro to Product: How former 50+ cap international player is building the future of sports technology

On June 23, the sports industry celebrated the 50th anniversary of one of the world’s most important steps forward for women in sport – Title IX.

This year marks 50 years since the passing of the U.S. federal civil rights law in 1972, known as Title IX. It prohibits sex-based discrimination in any school or other education program that receives funding from the U.S. federal government.’

Before Title IX was passed, just 1 out of 27 girls played a sport in high school and only 1% of college athletic budgets went to sports programs for women. Since its passing, Title IX has had a profound impact on women’s sports across all ages and levels of competition, bringing in a new era of funding and participation. Today those numbers are up to 2 out of 5 and 36%, respectively.

Someone who has taken advantage of the passing of Title IX, is Catapult’s very own Associate Product Manager Christina Julien.

Before her time at Catapult, Julien played soccer professionally for more than eight years. Throughout her career, she gained 54 caps for Canada, won gold at the 2011 Pan American Games, featured in a World Cup and was an alternate at an Olympic Games. The international stage was not the only place Julien enjoyed success – the striker also played for many esteemed club teams including 1. FC Köln, Perth Glory, and Ottawa Fury.

Julien now finds herself building the future of sports technology in her product-based role for Catapult.

In this Q&A, we find out more about her role, while Julien also offers up advice for current athletes looking beyond their playing careers and suggests how they can capitalize on the opportunities Title IX has opened up for the next generation of elite female athletes.

Q&A from Pro to Product with Christina Julien.

Q: What can sports organizations do or continue to do to champion female athletes?

Q: With reference to the sports technology industry, what can companies do?

A: I also think that sports technology companies can help with this by featuring female athletes, teams and users of their products in marketing campaigns and the likes. We can also show our support and belief in female athletes and teams by making products specifically for women rather than reusing and tweaking products designed with professional male athletes in mind.

Q: Why do you believe products have previously been designed for male athletes?

A: The reality of women’s soccer in my time was that generally, teams could not afford to use technology. So the majority of the clubs that I played with did not use much technology and, if they did, it was generally video which was more accessible. But this entirely depended on having enough staff to film practices and games – we often resorted to asking volunteers to film sessions.

Q: Did the use of technology change over the course of your playing career?

A: The use of technology in sports definitely became more prevalent over the course of my playing career. The main staples of sports technology (wearables, video) were first introduced to me in 2011 with Team Canada and used by a few clubs thereafter…

…During my university playing career, we only used video analysis but today the same team uses a combination of wearables and video analysis among other technologies. In general, it has been amazing to see that female teams are now gaining access to tools that can help maximize their athletes’ potential and manage their loads effectively and I believe it will only continue to get better.

Q: Once the technology was adopted by your playing teams, what metrics did they focus on and why?

…Why these metrics in particular?

A: In my experience, the biggest difference is an athlete’s physicality, technical ability and mentality. The game is quicker and you need a sound enough technical ability to play at the more physically demanding, faster pace nature of the game. You also need to be mentally strong enough to deal with adversity and to stop yourself from being affected by any pressure.

Q: Overall, what aspect of your performance did the use of technology help with most throughout your career?

A: It helped me reach my maximum potential. It was a heavy driver for me to beat my personal bests and to be among the top competitors on any team.

Q: Moving on to talk about your transition and pathway after your playing career – what inspired you to work in the sports technology industry?

A: When I first joined Team Canada in 2009, we had an Italian coach who was brilliant in her tactics and coaching but a bit old school when it came to technology and strength and conditioning. Under her supervision, and with high expectations, we finished last in the 2010 FIFA Women’s World Cup…

…Subsequently, she was let go in 2011 and our new coach, John Herdman, took over. He brought in Catapult devices, heart rate monitors, video analysis, an extensive sports performance staff, and proper benchmark testing – amongst other things. But what he did really well was use concrete data to make decisions and motivate our team.

In less than a year, we won gold at the Pan American Games, followed by a bronze at the 2012 London Olympics.

I was lucky enough to live in both of these environments to really feel the effects and motivation of using tangible data collected by cutting-edge technology. It made me really passionate about it and led me to finish two Master’s degrees in Sports Technology. I finished off my second degree in Melbourne, Australia in which Catapult became the natural next step in my non-playing career.

Q: So what is your role in Catapult?

A: My official title is Associate Product Manager and so my role is to understand and represent our customers’ needs and pain points, prioritize them and then work closely with key stakeholders, UX designers, and engineers to bring new features and product developments to life.

Q: Since you joined Catapult, what projects have you enjoyed working on?

A: I have helped deliver numerous new features and improvements in the last couple of years from athlete thresholds, max velocity notifications and multiple period selection to name a few.

*Julien played a role in the build and development of our latest athlete monitoring release – Vector Live App. This release enhances real-time data capture and analysis within Catapult Vector. Now, permitting for faster decision-making with real-time decisions from the sidelines.

This live, real-time workflow improvement ensures coaches and practitioners can react objectively when it matters most, during training, and saves them time during key analysis workflows since post-session analysis took countless hours after training and matches.

… and which project are you most proud of?

A: I’ve also recently been working on a project that makes our products more suitable for female teams and under-represented training groups which is the one that I am most proud of. Watch this space!

Q: Thank you for your time, but do you have any advice for others looking to follow in your footsteps?

Ask any athlete and they will tell you that there are many ups and downs in a career and the key to getting where you want to go is to keep fighting for it, regardless of how many times you get knocked down.

If your passion is in sports or sports technology then go out there and fight for it!

If you’re looking to start your career in sports technology, check out the Catapult careers page.

Catapult is actively trying to #BreakTheBias and unleash the potential of all athletes and sports. This vision, coupled with the upcoming UEFA Women’s EURO England 2022 starting July 6th, is another event that heightens the awareness of female athletes across the globe.

Over the last few months, the Women at Catapult (WaC) employee resource group has worked hard to develop educational programming for all Catapult employees and the sports technology industry.

As part of this learning, last week, all Catapult offices watched the documentary “LFG,” which chronicles the story of the women’s national soccer team, all of whom were collegiate athletes, and their fight for equality. 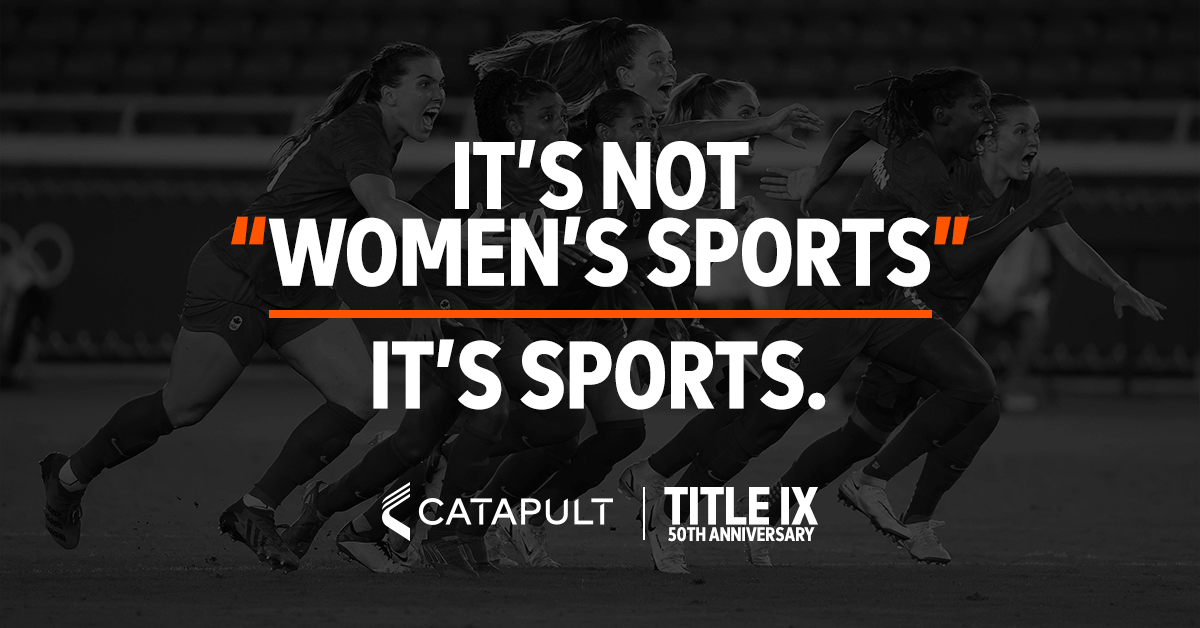 Those who missed that chance to engage in creating awareness of the 50th anniversary of the passing of Title IX, Catapult encourages you to listen to a podcast interview with soccer great Mia Hamm.