Sprinting looks deceptively simple. You run as fast as you can. And if you sprint over and over, you’ll get faster over time. That’s all there is to it, right?

Put very briefly, all ballistic tasks in sports (such as sprinting and jumping) are measured in power, and power is force multiplied by velocity (P = F x V).

Elite athletes, as powerful as they are, can still be deficient in one of these two factors of power. If they work specifically on either deficiency, they sprint even faster (or jump even higher). Besides simply sprinting over and over, an athlete should be performing resistance training targeted at either their force or velocity outputs, to increase the P in the equation. Find more information on “Improving Mechanical Effectiveness During Sprint Acceleration” published by Dylan Hicks, Pierre Samozino, Jake George Schuster and JP Morin.

Simple enough. So, how do you tell whether an athlete is deficient in force or in velocity? By creating a force-velocity profile (FVP). The traditional way of creating a FVP includes careful measurement of body mass, height, linear force transducers, such as Gymaware or Force-Plates, and either distance-time data or speed-time data over many sprints, with several splits per sprint … which requires careful observation, ideal conditions (indoors is best), and decently complex calculations. Greater detail can be found here [Force-Velocity Profiling – Science for Sport].

More accurate creation of FVP, at the elite levels, has traditionally used radar technology, which is a dedicated, relatively expensive option.

To get correct speed gun readings most radar guns will need to be placed directly in the line of travel of the object to be clocked, otherwise, only a component of the true speed will be measured.

So, might there be a better option than radar? 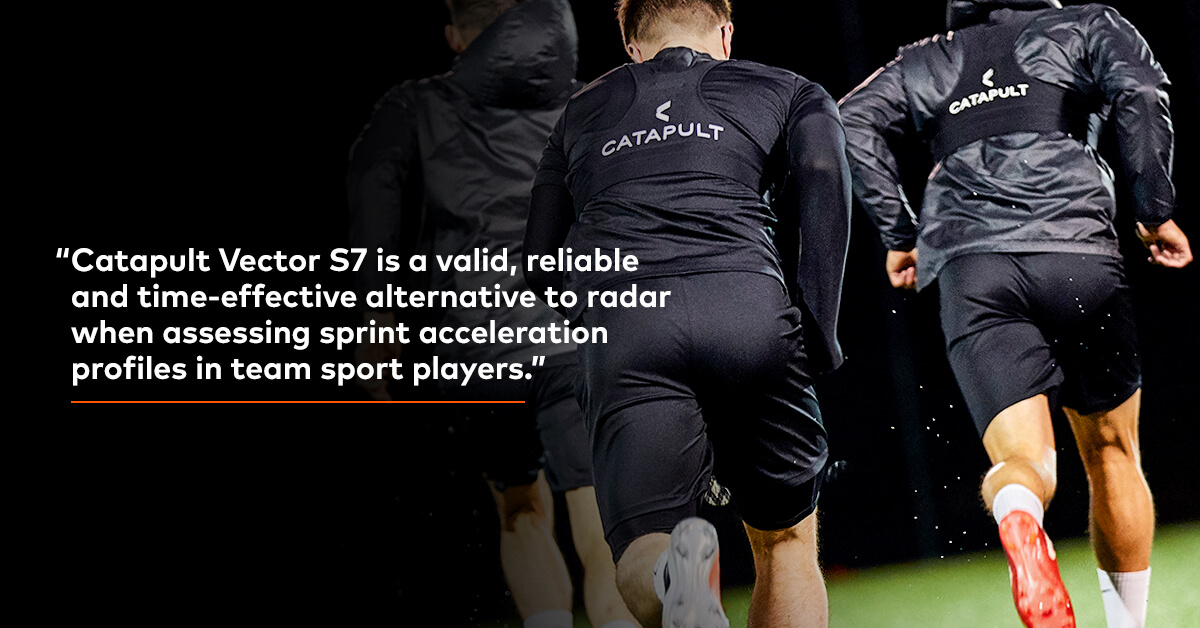 The study concluded that the wearable GPS devices represent a valid and reliable alternative to radar devices, saving money and time with no statistical loss in accuracy. So, less time and effort is needed to assess whether athletes need more force, or more velocity, and more time can be devoted to the specific training that will target their specific deficiency — and make them run faster.

This study verifies the reliability, accuracy and efficiency of the Catapult Vector athlete monitoring system to empower critical decisions about player performance, risk of injuries, and return to play.

It allows teams to prepare for the demands of any competition by managing player workloads, monitoring individual athlete development and enables organizations to save costs on radar technology purchases – without compromising on valid acceleration velocity data.

→ To arrange a free demo of Catapult Vector, click here.

For example, Catapult Vector captures more than 900 data points per second, live algorithms calculate metrics that are relevant to each sport and can be analyzed in our sport-specific product suites. These insights allow for better coaching decisions.

→ Click here to learn more about Catapult Vector’s capabilities for your sport.